Antye Greie Ripatti, better known as AGF, recently hosted an all-day workshop at one of London’s best experimental music venues, Cafe OTO. In the day, we were invited to participate in “an afternoon of playful music-making for all ages” — fusing lo tech gamelan-style DIY string instruments with hi tech iPad technology. This then, laid an appropriate foundation for the evening proceedings, since AGF’s work has frequently married traditional styles with modern performance techniques.

Her rendition of ‘A New Woman’, for example, was particularly touching. The piece is inspired by Hiratsuka Raicho, who published Japan’s first all-women’s literary magazine more than a hundred years ago. The opening of the collection refers back to the Japanese foundation myth of Amaterasu, goddess of the sun, who emerged out of a cave and brought sunlight back to the universe. It reads, “[i]n the beginning, woman was truly the sun. An authentic person. Now she is the moon, a wan and sickly moon, dependent on another, reflecting another’s brilliance.” AGF’s reinvention of the message carries with it an added technological dimension, as she creates contorted glitch modulations in the vocal.

Furthermore, the event stressed that “all ages are welcome from 5 upwards”, and that no prior experience was necessary for the workshop. Again, this underlines one of the key aspects of AGF’s work: inclusivity. Indeed, the highlight of the show involved an inclusion of audience participation, as we were encouraged to collectively produce any noise that we could muster. “It could be a low hum”, she explained, “or the soft whisper of wind”. The result was an uneasy creaking around the Cafe, providing a eery juxtaposition for AGF’s own contribution; a spoken rap of HTML code in German. “I want to dedicate this to Edward Snowden” she declared, “because he is always telling us to encrypt, and he is right”. 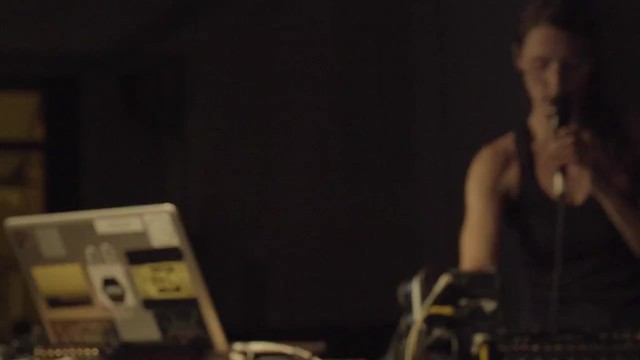