For many artists operating in the avante-garde electronic music sphere, audiovisual performances or installation art seem to be something of a graduation point. Dasha Rush’s recent Dark Hearts of Space performance at Unsound, or Peder Mannerfelt’s technicolour acid trip displayed at Atonal 2015 are case in point, as are the installation pieces developed by the likes of Alva Noto or Ryoji Ikeda.

One artist who has never separated the link between audio and visual performance is Dutch artist Mariska de Groot. Earlier this year I was lucky enough to catch one of her projects at Newhaven’s Fort Process Festival. The billing saw de Groot operating a light and sound instrument she has created, which attempts to trace the orbit of ‘Nibiru’ - a planet which is said to pass our solar system once every 3000 years. Granular itches and grating drones soundtracked the swinging pendulums and spirograph like projections, adding to the surreal, otherworldly quality of the piece.

Through her work, de Groot has shown a keen interest in the history of electronic instruments, from the 1920s Russian avante-garde, to the experimentation of pioneers like Daphne Oram and Rudolph Pfenninger. Following the festival, I caught up with de Groot to talk lost planets, the ‘instrument inventors initiative’, and the possibility of a Mariska de Groot retrospective in 2032.

I enjoyed your performance at Fort Process a couple of months ago. Was that the first year you’ve been? Who else did you enjoy seeing there?

I had a great time discovering noisy treasures in the reverberating setting of the fort! I’ve seen Sculpture and Pierre Bastien performing a few times now and although I know what to expect I always enjoy it a lot. I was very surprised about the performance from Ewa Justka. She played one of the best noise performances I’ve seen in ages - very intense.

Can you explain a little bit more about the ‘Nibiru’ project for those unaware? The projections trace the planet’s orbit right? How did you first hear about it and where did the idea come from?

As I was developing the pendulum instrument I became aware of its cosmological power. When I was searching for the meaning of what the instrument wanted to tell me, I realised it must be the orbiting of a lost planet that it is trying to trace. Since then I have been in conversation about the position and movement of Nibiru.

Nibiru is a lost planet that’s never been discovered. It passes our solar system every 3000 years they say.

Me and my instrument are trying to understand how Nibiru orbits. By capturing light and sound we create a drawing of the planet. Every time, Nibiru seems to make slight changes in its movement. I am starting to think Nibiru dances a galaxy old choreography.

One of the things I enjoyed about your performance was the closeness of it - maybe it was just because of the smallish space but it felt like the audience were really part of the experience. I was reading about your ‘Murmur’ project - how it reacts to the audience’s movement. Is the idea of audience interaction/involvement something which you think about a lot?

Actually I don’t work with the audience much, in an interactive way at least. Most of the time I don’t like interactive new media art as it is often more like a gadget than an exciting experience.

In Murmur, the installation, the work was reactive of the movement of the visitors in a meaningful way. The sounds refer to the deep sounds of the earth or the murmuring during spiritual ceremonies. By walking in circles, the water would follow you, provoking the experience of a ritual.

In my performance work it works slightly differently. I’d like to have the audience as close as possible connected to the playground. I see the walls of the space where I perform as the housing of the machine I operate. The audience is the Wabi-sabi of the piece.

Without the audience, it is as if the machine is brand new, straight from the factory, with the smell of newness and no flecks of dust. In a tight space with a large audience, the machine gets hot and dense on the inside, resulting in an intense experience. In big spaces it is possible to spread out and there’s space to show it’s beauty.

There were some audio-visual installations at Brewer St Car Park from Carsten Nicolai and Ryoji Ikeda last year. I remember being struck by how some of the projects stretched back to the ’90s but were still being booked for display in 2015. What’s your take on this? Is Nibiru something you can imagine performing in 10, 20 years time for example?

Wouldn’t it be nice, a ‘Mariska de Groot Retrospective’ in 2032?

My works are about phenomenological experiences and I use materials from different periods. I think they’re quite timeless in that sense and stay interesting. A lot of my work might be still relevant. I wonder how I would look back then, on how I made things and played them now. 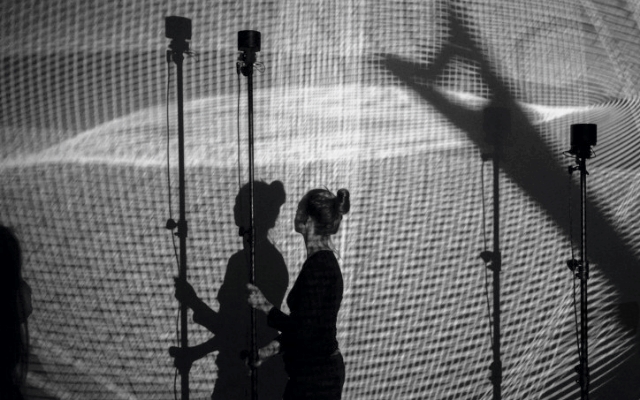 I noticed you have mentioned the work of Daphne Oram in a couple of places - did you manage to check out the Mini-Oramics machine at Fort Process?

Of course I had to see the mini remake of my hero’s work. Great to try it out also! It’s not easy to draw something that makes sense.

However, Daphne’s version - the Prototype Deluxe if I may say - is much more charming and has much more soul. It was made over many years of research and material finding.

In 2014 I was in London for Nime and managed a super quick visit to the Science Museum where the Oramics machine was displayed. I had forgotten about its display there, so I was enormously excited finding it. It was beautiful to see how the components are build into the closet she used to house it. You totally grasp the energy and focus she had working on it. I find the inventor’s prototypes much more interesting than the spick and span industrial designs, but maybe I’m just a slight sucker for nostalgia.

What is the arts scene in the Netherlands like? Do you find most interest in your work comes from abroad or are you booked for many performances locally?

The problem so far is that my works are too big to bring with me on a flight, transport is often costly. So most of the time I’m booked in a radius of 800km, a distance I can easily drive. I wish I could go overseas though. I also wish to make a suitcase instrument!

You presented CineChine at ADE recently. Can you tell me a bit more about the thinking behind it and its connection to the Russian avante-garde in the ’20s?

When I started my research on optical sound I stumbled on the comprehensive history of the first synthesizers in the 1920s Russian Avantgarde and the fascinating stories of their inventors, all collected and written out by Andre Smirnov. The A.N.S. Synthesizer, the Rhythmicon and the Variophone were a big inspiration, but I was sorry the magic of light being sound was so tiny and hidden in a machine and me being so big. I decided to create an instrument that explores optical sound in a more physical and syneasthetic way. Using the walls of a room as the casing, in Cinechine [the installation version of the instrument Lumisonic Rotera] you’re entering the inside of the machine where light and sound are the same naturally.

What’s next for yourself? Any new projects/performances coming up you are able to tell us about?

How did you first become involved with them? Tell me a bit more about the project.

I’m one of the founding members. We’re a group of instrument makers that all graduated from the ArtScience interfaculty at The Hague. Our performances often have an ideal timespan of 20 minutes which sometimes makes it difficult to get gigs in the right setting. We decided to create our own platform to present our programs and tour around like a circus. Soon we grew into a full organisation. Now we invite artists for residencies at The Hague, produce new works and curate bigger programs and exhibitions that also involve artists outside iii.

We all work in the same field and a lot of us have a same kind of aesthetic, but we’re all working with different senses, methods and materials. I see many works developing from the start and it is interesting to be so close to someone else’s research on - for example - how smell gets on the stage, how taste works with sound or how the body can be used as an instrument.

Sometimes we get the chance to create collaborative work. In 2015 we created a kind of ‘gesamtkunstwerk’ for a big church in The Hague, called ‘Rites for a New Utopia’. We used the building for a series of new works melted together to become one long evening filling piece. Starting with a piece of ‘our’ Lars Kynde for the carillon at the top, bringing overtones of the bells to the belly of the church with a piece of Angel Faraldo. Slowly we worked through an installation of Matteo Marangoni and a light and sound performance by me, Dieter Vandoren and Matteo Marangoni towards the altar where Horst Rickels played his beautifully made Mercurius Wagen. Different pieces became one whole concept and experience.