Austrian musician Susanne Kirchmayr has worked rather tirelessly over her career. Pedaling leftfield electronica for over 25 years under her Electric Indigo pseudonym, Kirchmayr has explored everything from granular synthesis to compositions for theatre, sound installations and various different strains of techno.

She also founded the female:pressure network in 1998 with the aim of supporting upcoming female producers in a severely unequal landscape. 17 years on and the platform has grown far beyond expectations, with over 12,000 members spanning 60 countries around the world.

With a performance at Krake festival upcoming, we decided to catch up with Kirchmayr to discuss female:pressure, vocal manipulations and what it was like to work at Hardwax in the 1990s.

So ﬁrst off how are things? You’re helping curate Popfest Wein, how is that going?

July is actually really busy - so things are very good! I just came back from Madrid and played a DJ set at ‘://about blank’ in Berlin. I also performed a concert at Heroines of Sound Festival, Radialsystem V on the 10 July, then had a gig in Vienna at good old Flex. Next I have Popfest Wien where I’ll have to present 57 acts together with my co-curator Trishes over four days from the 31st. I’ll also play at Nachtdigital Festival. In between I have to adapt my MORPHEME piece for Krake Festival because I want to add a new part specially for the occasion…

Curating Popfest Wien with Stefan Trischler (aka Trishes) was a really good experience. The festival is for Austrian acts only, meaning we could only invite artists who either live in Austria or are Austrian citizens, or collaborative projects with Austrian artists. This limitation made me learn a lot about the Austrian scene and the indie/band scene during the past year. Usually, I’m not very involved in the pop-sphere so it was very interesting for me to take this dive in from the outside. The great thing was that my distanced view of that scene was really appreciated and I got along with Trishes really well. He comes from a hip-hop and soul background and it was surprisingly easy for us to make decisions together. Without having known each other before, it turned out we have a lot in common when it comes to musical taste, sociopolitical views, love for sound etc.

I was a big fan of your EP for Suicide Circus - your tracks seem to reach a very effective midpoint between your more club-focused sound and the granular experiments you have been composing. Would you say this is a fair observation? When did you ﬁrst develop an interest in granular synthesis in the ﬁrst place?

Thank you! And yes, that is a very fair observation! I am slowly arriving at a point where my two main musical interests - techno on the one hand and music that can be described as electro-acoustic/avant-garde on the other - come together and fuse in single compositions. But of course I feel that I have to go further - I’m not there yet.

My interest in granular synthesis came from the idea of transforming spoken word recordings in various languages into increasingly abstract sounds. It is the most obvious method, I guess. But of course, there were other granular transformations I used before - mainly using Ableton Live audio effects like GrainDelay, or MaxForLive devices like GrainFreeze by Robert Henke. For my ﬁrst multichannel piece “Structuring Contours” I wanted to spatialize monophonic synthesizers, in particular my Multimoog with slowly increasing, differing microtonal shifts for each channel - a less easy objective than I originally intended as I wanted to play the shifts live.

Luckily, I was already friends with Robert Henke and he helped me with building an M4L device based on a granular delay that could do microtonal shifts as a live audio effect - naturally with a slight delay though. This was another step to start to get a bit deeper into “grains”.

I read that you were experimenting with creating music using spoken word recordings - can you tell us a little bit more about this project? Is it still ongoing?

I composed several rather conceptual pieces based on recordings of spoken word in different languages. The ﬁrst one was “Chiffres”, a commissioned work for e_may/Wien Modern Festival. I had to compose a 15 minutes work and made a piece with 15 parts, each one minute long.

For each part I used recordings of the respective number in over 20 languages and dialects; for the ﬁrst minute I used all ones, for the second all twos and so on. Between every minute there is a short break with a countdown that starts at 15 and ends at zero which is also the end of the piece. I made a call on Facebook and through our female:pressure mailing list asking people to record the numbers 0 to 20 in their mother-tongues (I ﬁrst thought the piece was going to be 20 minutes) and I got a lot of very nice and very different recordings. I still use the recordings to check multichannel connections at soundchecks! 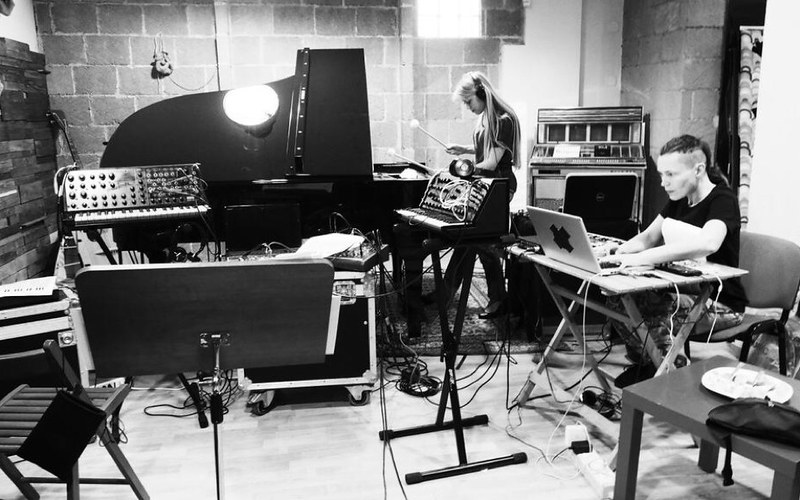 Shortly after that I was invited to perform at a concert/reading together with the Austrian writer Valerie Fritsch and it was immediately clear to me to use her text to make the music. Quite a few other projects followed. I am very much into language and linguistics, I studied linguistics for a while and I’ve loved reading since I was a little child. Words, verbal expressions and variations, grammar, word forms, characters and so on are quite fascinating for me…

‘MORPHEME’ which I will play as an A/V concert together with Thomas Wagensommerer for Krake Festival this year is completely derived from a sentence Sadie Plant said: “To let noise into the system is a kind of ﬁne art in both cybernetic terms and in terms of making music, too.” Thomas makes the video with 3D representations of each character and I used the recording of Sadie Plant saying this as my basic raw material.

This summer, I will probably do some abstractions of pop song lyrics for a commissioned work for Wien Modern 2015 which will premiere in November.

I believe I am right in saying you worked at Hardwax for a while, what are some of the standout memories from working there? Was it much different back then to how it is now?

I think the biggest difference was the frenzy upon the arrival of new records and on Fridays before the most important weekend gigs. The shop was full with DJs - stars, no-names and newcomers - and all of them listened to the buyer who unpacked the new arrivals and skipped through the records. If they liked what they heard their arm went up and they tried to make eye contact with one of the staff member to get hold of a copy. It was really funny! The whole music distribution worked completely different from nowadays, there were no previews online and no immediate digital copies of tracks available. So people’s curiosity, eagerness and excitement was huge and it was also quite difﬁcult to get an early copy of a hot record as usually only a few arrived at ﬁrst. So the “ordinary” customers had to wait a week or more after “V.I.P.” customers already bought it…

Can you tell us a little bit about your work composing for theatre and ﬁlm as well? How did you ﬁrst get into this kind of work and do you think it has had a big effect on the music you produce solo?

I think my ﬁrst soundtrack for a short ﬁlm was for an art video about Nicola Tesla by Marko Lulic. The ﬁrst time I made music for a theatre play was much later, in 2011. The director Barbara Klein asked my colleague Pia Palme and me to create the music and play it live for her staging of “Das kleine Zimmer am Ende der Treppe” by Carole Fréchette. Working for theatres is quite a challenge because basically the music needs to be ready before the director, choreographer and actors start to develop a scene. But to make the right music I need to get a concrete idea about how a scene is going to be staged. It seems to be impossible but somehow, with great ﬂexibility, a quick workﬂow and very little sleep it works out in the end. This doesn’t only apply to the score but also to costumes, stage design and the whole technical setup. It is a very intense kind of team work and an extremely effective exercise in terms of musical creation, production and spatial acoustics, too! Almost every time I’ve made music for theatre I’ve used the material for other projects later on, developed it further and put it in new contexts.

You are founder of female:pressure - have you been surprised by how signiﬁcantly the project has grown since you ﬁrst established it? Has it been good seeing other people become more directly involved, like with AGF’s ‘Visibility’ project?

Yes, I’m quite happy and positively surprised about the impact female:pressure has had especially in the past two years. I founded the network in 1998 and for 15 years it grew slowly but steadily. Since 2013, when we managed to release our ﬁrst facts survey and the respective press release in nine languages, it became a lot more obvious how well the database, network and the associated channels can be used to create international media feedback and awareness of the diversity lacking in electronic music and digital arts. The network has only been alive because of individual engagement by its members so the direct involvement by people like AGF and many others was always given to a certain degree. But the more it happens the happier I am!

You have an appearance at Krake in August, is this the ﬁrst year you’ve played the festival? Who else are you looking forward to seeing on the lineup?

Yes, it’s going to be my ﬁrst time at Krake Festival. I’m especially looking forward to the exhibition at Urban Spree and I’m very excited that I will be able to see my friends Inner8 and Ken Karter play live for the ﬁrst time. Of course, the whole program sounds super promising. It is very hard to pick out single events, but I’m also very curious to see Solaris play - I love her mixes that I’ve heard online.

Finally, what else do you have in store over the rest of 2015? Any upcoming releases/ projects you are able to tell us about?

It’s going to be busy: the aforementioned new composition for Wien Modern that is going to deal with number one hits in the U.S. Billboard charts, a new solo live show that is going to be more danceﬂoor oriented - a combination of soundscapes and rather brute, industrial beats that I’ll premiere under a highway bridge for Architektursommer Rhein-Main in September and will hopefully also play for City of Women in Ljubljana in October. I will hold a workshop about granular synthesis at the Ableton Loop Summit end of October/ beginning of November. The next releases are going to be “109.47 b” - an ambient track on a female:pressure compilation on Different Is Different Records which is a derivative work of 109.47 degrees that I just performed at Heroines of Sound Festival in Berlin, a remix I just did together with Monolake for Cio D’Or on Semantica, and I also have a new track on the Krake compilation for the early bird ticket buyers…