Dscrd - pronounced ‘discordance’ - have, with just a handful of releases, generated a significant buzz around themselves. In particular, their contribution to Stroboscopic Artefact’s legendary Monad Series, and their latest EP, ‘Panopticon’, forged a space for the group beyond the reach a single, definable genre, teasing out fresh flavours alien to the ear.

Ahead of their performance at Berlin Atonal next week, we spoke to the quintet about the festival, political complacency, post-structuralism and ‘the rave’.

So how has 2014 been for you guys so far? How have things changed since the release of your Panopticon EP?

As expected, nothing really changed since the release of the Panopticon EP except the fact that we now have two new comments on our RA page debating how shitty our band name is. More seriously, we’ve had some very nice gigs this year in amazing places, and met some very interesting people - like at Strichka Festival in Kiev where we were warmly welcomed regardless of how tough and sad the situation has been for Ukrainian people recently. We actually like thinking that releases like our last EP help us grow and give us the chance to play on famous stages such as Strichka or Atonal festival. So we are in fact pretty much pleased with our current situation - May 2014 ends up in noise and trance.

How did you first meet, and at what point did you start producing together?

All this started in the south of France. We were three at the beginning; childhood friends who used to make music together and play with some very cool and colourful music software that sounded like plastic shit. Some years later, we met again in Paris as everybody moved there for different reasons like finding work, studying, seeking beautiful girls, becoming rich and famous … All of that failed more or less, but we met the two other guys (the north team) in very strange circumstances and we never quit with each other.

We slowly developed the concept all together, upgrading our production techniques as they were intriguing with their shiny microphones, and our path crossed the road of some other enraged activists that invited us to join our forces with them. The first was the SNTWN Crew, and they let us deploy our early singular beats in front of their young crowd. We instantly became very good friends in our desperate quest. They are quite unavoidable now in the Parisian Scene, because they were and are still pushing some next level music that is really refreshing. A couple of years later, we were introduced by Voiski (Polar Inertia) to Heartbeat from the fresh and young label DEMENT3D. They were the first ones who really understood the sense of what we were doing so far, and we were very impressed by their aesthetics. That was really important motivationally, and we had our first EP.

I find the live dimension of your work intriguing; unlike most artists working in a similar vein, I understand you work with some improvised and live elements both on stage and in the studio. Can you explain, for instance, how you go about recording a track like ‘L’Etale’?

The main lead of _L’Etale, _this abstract high larsen slowly evolving from a tiny white noise to an almost pure sine, was for instance recorded by tweaking an old Tascam DAP-1 recorder; it was then edited and mixed on the track, at the same time helping to forge its narrative structure. Actually almost all tracks start with fresh sound design material. The source is a wild mix of processes such as the one described above. It is then a perpetual exchange between the beat, the atmospheres, leads, punctual edited sound design and so on until the track receives its final form. This is quite a natural workflow in our opinion, since we play live performances and produce tracks in the studio with the same gear, allowing for a lot of improvisation and instant creation.

How do you manage the creative input and influence of five different people? Is it always a collaborative effort or do you produce things individually and bring them to the group?

As we are all nearly the same age, we have grown up in the same culture. There are actually loads of topics that interest us every day.

Music: Constantly inspired by the works of the masters, classic, acoustic, early electronic and experimental music from past decades as well as the fresh stuff - the darkest and weirdest electronic performances to the very straight techno stuff happening these days.

As well as subversive literature, we are passionate about science and technology, in a technical and philosophical way.

This mix of interests is the source of rich debates and inspirations, and the challenge here is to stay focused on a unique direction, for the band and for our projects. Sometimes it can be overwhelming, and sometimes it can flow naturally. This brings complexities that slow down the workflow a bit, but at the end, that’s an acceptable trade off for an exhaustive exploration of our five universes.

What can we expect to hear from you at Atonal festival?  Who are you most looking forward to seeing at the festival this time around?

Some noises for sure! To be honest Atonal this year is full of new faces for us and we’re proud to be part of that, but Atonal 4D is definitely what sounds like the more exciting event for French acousmatic music lovers. We’re looking forward to see what Murcof is going to perform with such a terrific installation!

How have you found different crowds responding to your live performances? Do you feel more comfortable playing to a Berlin crowd, than say, in your hometown Paris?

The crowds of Paris and Berlin are really different in essence. From the beginning we were often considered a UFO in most parties we did in our hometown, except for one or two concerts where we were more in our element, with a set sized for the occasion. Generally speaking, the crowd is younger and more excitable in France, with less tolerance for experimental sounds. We experienced situations where a bunch of guys, totally toasted, were standing in front of us, insulting and yelling for some house music.

We have nothing against house but that is the kind of situation where you need a lot of self control to avoid a punk style finale where all the gear flies in their direction! On the other end, we are less experienced with gigs in Berlin, but we noticed an important maturity in the crowd. People here are more curious and accept a wide variety of performance. Berlin Atonal is the confirmation of that feeling.

Your latest EP has strong nods to Foucault, and I’ve read that you intend to use these political ideas to enrich and narrativize the music rather than to promote one ideology over another. Can you expand upon this a little? Why Foucault?

The book of Foucault speaks about the carceral world from the early days of Western civilisation. While it was not interesting to extract the entire narrative aspect for this work, we focused on a small but meaningful part of the book: the surveillance and of course the panopticon. It inspired us because of the aesthetics, but also because the symbol is singularly resonating with the recent revelations on the NSA activities. Foucault is a great thinker of the modern world, and his work is essential to understand many aspects of our civilisation, especially the darkest. 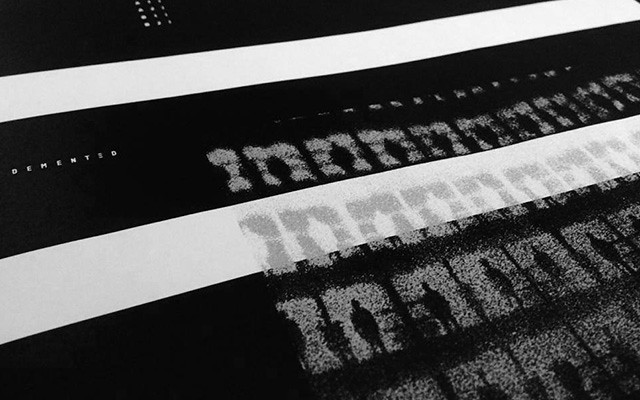 It’s really difficult to say. If mainstream means all the soup of summer festivals where over young people are waiting to receive a pie in there face from a DJ playing pre-mixed shit on a USB key, we can consider that there is still a high level of implication from recent underground electronic musicians. On the other end, everything is so standardized as an industry now, particularly in London and Berlin, with this supply chain of booking/promotion/clubs… We sometimes have the feeling that the electronic music scene has nothing to envy over other industries in terms of corporate organisation (except the capital maybe …). Nothing is really going in the direction of political revendications, it is mainly a matter of aesthectics and hype of the moment. Also, we think it is somewhat logical that underground musicians having worldwide success cannot be associated with the real and only political act of in the electronic music now: the rave.

How do you think format falls into this? Do we have an obligation to keep record stores in business, or should we embrace the digital-format industry model?

As everybody knows, the digital music industry is led by questionable interests as pretty much every kind of industry and businesses in the world is. The vinyl format proves that there are still a bunch folks that aren’t willing to fully embrace the industry standards; each format is worth using for the sake of music and knowledge.

On your Resident Advisor biography, you state; “[w]e are activists for an “open” experimental music” – what do you mean by “open” here? Which parameters do you think experimental musicians should try to break down? Are there any?

It’s funny you’re mentioning this old biography written maybe six years ago when we were starting to play together, who knows what “open” meant to us then - for sure some juvenile excitement, maybe we were just alluding to this trend to oppose digital in favour of analog in music production.

Finally, what have you got planned for the future? Any exciting projects you can tell us about?

We plan to work with Stroboscopic Artefacts on a various artists release for the end of the year, and maybe some other things but it’s still unofficial!