Reshaft is a collaborative project from Mizkami Ryuta (a.k.a Motoro Faam, mulllr) and Yui Onodera.Their debut record Decon (released last month on Comfortzone music), is a mesmeric bundle of brilliance that expands and contracts as it plays, creating new sonic forms within forms, and subtle, rhythmic patterns that cause tiny chain reactions in your ears. Ryuta and Onodera have made music that is, in a way, paradoxical - it fades into, but also enhances background noise. Their blend of organic and electronic sound is complex and craftily arranged, and presents the listener with unanticipated breaks and shifts in direction.

Stray Landings talk to Onodera and Ryuta about rebellious crows, famous stone gardens in Japan and drifting from the path most travelled.

Why did you call the record ****Decon? And why the album cover of a crow perched on top of an air vent?

Onodera: The album title comes from essayist Jacques Derrida’s deconstruction. Reshaft is our platform to experiment with new methods – to go somewhere different from both of our previous work styles. So this album reflects many of our challenging ideas, and marks a departure from our usual ways of music production.

The photograph is by a Japanese artist called Nozom Yoneda, and we chose this image among the few hundred photos in his collection. We thought that this isolated crow would perfectly represent our will to go against the present music scene. Nowadays, everything seems so average because people are aiming to be a generic icon that easily appeals to the crowds - so this solitary, black coloured crow can be seen as a symbol of rebellion. Also, in the ancient myths of Japan, crows appear as three-legged ravens, which indicate a good omen.

Mizkami, do you remember when you first met Yui?

Mizkami: It was around 2006 when I met Yui for the first time - I sent a demo tape to his label. Last year, I met him again through a mutual friend, and Yui asked me if we could collaborate on a project. Then this project started!

And how did you go about the collaborative process?

Onodera: We both wanted to make this a platform to experience something different from both of our previous solo albums, so we tried various approaches for a diverse output in order to challenge this. We have done many collaborations with foreign artists before, but for Reshaft, we had the convenience of both living in Tokyo, so we were able to actually make music together in a live environment, rather than just sharing files across the web.

It was an exciting experience for me and I was able to discover many things - not to mention this process was significantly different to our normal music-making methods, as we had to abandon our usual music production patterns. Ryuta and I wanted to push ourselves into a new place; we tried to stay away from our traditional walking paths.

Tell me about the process of making the record. Did you use field recordings or any strange instruments?

Onodera: My main focus when making this record was to create beat-oriented music using field recordings. Not just constructing with electronic sounds but something more complex where the organic textures of the environmental sound moves around as rhythms. The majority of the sound that appears to be electronics is actually environmental sounds processed into complex layers. We are very satisfied with the outcome as this is something we haven’t approached in our solo works. 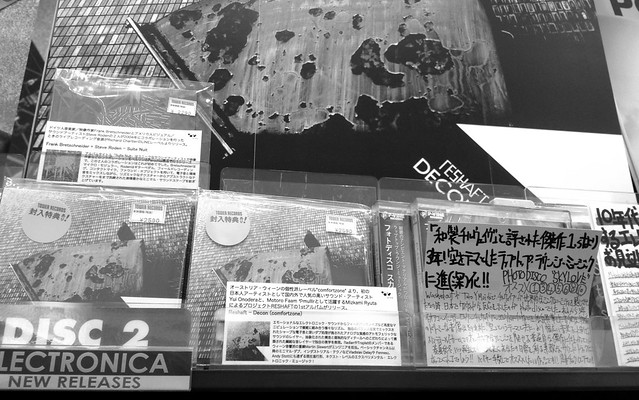 Do you think your approach on the record different much to how you would work as a solo artist?

Mizkami: For me, basically there is no difference. I simply want to enjoy composing music. At first Yui and I thought we would make one or two tracks as Reshaft to enjoy different ways of approaching music. However, we decided to continue the collaboration a little longer because we felt that our music was exciting, and the process went more smoothly than we thought.

The first result is Decon. For Yui and for me Reshaft is very experimental, we have been enjoying producing the unexpected, and we expect something other than what we can produce as solo.

I read that you were a fan of the De Stijl movement in Art, about finding random artifacts and putting them together to make something new. Did you apply this method to Decon?

Onodera: Good question. Like you said, our approach is very close to the method of De Stijl where we build stories using limited materials. It’s not about the reality i.e. deconstructing objects and recomposing them by picking up the main elements - but transforming actual elements with obscurity into the non-systematical.

In Japan, we have a famous stone garden in the Ryōan-ji temple, and we call this style of beauty “Karesansui”. It’s a very Japanese feeling where people find beauty in something that seems without balance. It’s the same with me, I always feel the value of beauty within the unbalanced. I think it’s important to express what’s expanding beneath the surface, without being swept away by a particular emotion.

Can you tell us a little bit about the electronic music scene in Tokyo at the moment? I read the anti-dancing laws in the city have just been repealed – how much of an impact do you think this will have?

Mizkami: Indeed the number of nightclubs in Tokyo has diminished, but I suppose we definitely have more opportunities and places to go for music (including the Internet) than a decade ago.

I live in Tokyo, though I listen to music without caring about the regions, or where and when the music belongs to. I guess everyone feels the same. Most of the Japanese think that this law is such a stupid idea - of course, as a musician, and as an individual, I feel the same. It is so absurd that I have nothing to say about it!

Finally what can we expect to hear next from Reshaft? Do you see the record as a one off project at the moment or are there plans for more material?

Mizkami: Reshaft is unpredictable and we don’t know where it will go… but we are working on an exciting project for the next step - please keep an eye out for what’s coming.