Tommy Four Seven’s productions have never sounded quite like that of his contemporaries. The construction of his 2011 LP Primate perhaps typifies his unique working methods best - restricting himself from using synthesisers and soundbank percussion samples, T47 instead chose to work extensively with a field recorder, capturing all manner of sounds and manipulating them far beyond recognition. Presumably inspired by his work as a sound designer and foley artist, the results proved remarkably effective, contributing to one of the most texturally vivid techno albums out there, demonstrating that technological restrictions can prove immensely effective in the pursuit of originality.

Despite the fact that T47’s sound is often associated with German techno scenes, he originally grew up in the UK. Studying music technology in London, he then moved to Berlin with long standing friend James Kronier aka Alain a short time after completing his studies. Last year the pair fulfilled an obligation they made in their student days, releasing an LP of droning, apocalyptic noise under the moniker These Hidden Hands.

With an appearance on Stroboscopic Artefacts’ string of EPs celebrating their fifth anniversary due out shortly, we decided to catch up with T47 to discuss his move to Berlin, These Hidden Hands, and taking Veganism on the road.

So first off how are things? The latest ‘5YEARS’ EP for Stroboscopic Artefacts is due out in early December – can you tell us a little bit about your contribution to the EP and your relationship with the label more generally? When did you first meet Luca?

My mind’s a little hazy when thinking back to the start of my time in Berlin but I think I’ve known Luca since moving just under six years ago. We came up in the Berlin scene around the same time and we both released our debut albums in 2011, followed by swapping remixes. In 2012 Luca invited me to release an EP for his newly formed Monad series so our working relationship has grown with our friendship.

You originally grew up in the UK. What were your early experiences of electronic music like, and what were the shortcomings of living here?

My early experiences of electronic music were during my school years. Jungle/D&B rave cassette tapes such as One Nation and Innovation were always circulating around, as were recordings of House & UKG from pirate stations such as Flex FM. I began mixing when I was fourteen and was getting a lot of old house and techno records form my cousin who married a high profile DJ. So at an early age I was totally intrigued by rave culture, DJs and obsessed with sharing new records with my mates or anyone who’d listened.

Your collaboration with James Kronier (Alain), ‘These Hidden Hands’ seemed to be your biggest project of last year, can you tell us a little bit about your relationship with James? The bio for your label ‘Hidden Hundred’ suggests the collaboration was a large part of your move to Berlin in the first place…

Alain and I met whilst studying Music Technology at what is now the University of West London. I was really impressed by his productions and after hanging out we found we had a lot of common tastes, especially in D&B and we decided to write some tracks together, the first being for my now defunct label, Shooting Elvis, entitled ‘Strix’. We clicked in the studio and as our time at university drew to an end we thought about writing an album together. At this time I was DJing a lot in and around London but felt trapped musically. After a short visit to Berlin in 2008, I decided Berlin offered more opportunities and seemed more artistically friendly. Alain spontaneously decided to join me as he was a bit fed up in London at the time anyway, and we formed this big vision of writing a collaborative album. But with all the hurdles which come with moving to a new country, and our own individual commitments, it ended up taking a bit longer to come to fruition than we originally intended. 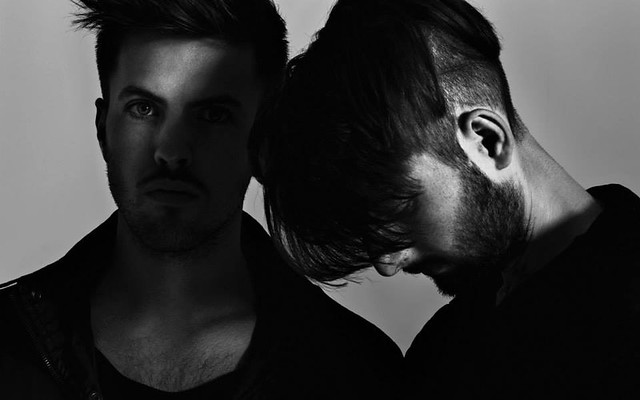 Your sound-design based approach to production is rather unique, and I can imagine being quite far removed from how many other producer’s work. How do you find the collaboration process generally? Do you have to change your working methods at all?

I like to mix things up and also let myself be inspired by other producers and engineers - collaborations are a great way to create new methods and to bounce new ideas around. But when collaborating with Alain as These Hidden Hands, we already know each other’s ways of working so well, it was actually more productive to first write in our own studios separately, taking it in turns to adapt each others ideas until we reached something we were both feeling. Then once solid foundations had already been laid for a song, we’d often continue the final stages together in the same studio.

Is there more material planned from the two of you or are you trying to focus on the T47 stuff more again now?

We’ve taken a small break to give space to our other projects. I recently launched a new event series called ’47’ at Arena Club, Berlin which will also serve as a label supporting the various guests and I’m also working on finishing some much needed solo material. Alain and I do have a new album in the pipeline and we will do a few more live shows once it’s finished but we don’t pressure ourselves as from the very start, These Hidden Hands was conceived purely as a project for us to collaborate on uncompromised music that we wanted to make, and doesn’t have any other specific goal or commercial motivation behind it.

I believe I am right in saying you are a fellow Vegan! Is it a struggle to maintain what with touring so intensely? I know it’s a concept that is almost non-existent in certain countries…

Yes you are right! I find it’s never a struggle to maintain as I can’t imagine eating anything but vegan, however it can be difficult to eat delicious vegan food when traveling. That said it’s getting better year by year as more people are becoming aware. Normally the first thing I do when arriving in a city is to check a phone app called Happy Cow which shows the nearest vegan and vegan friendly restaurants (a recent life saver in Japan). Many restaurants serve vegan food without knowing what vegan means, or have enough ingredients to just get creative. If there’s really absolutely nothing good to eat, you’ve got to have a back up plan. For me that’s normally fruit!

Do you think DJing so regularly impacted your productions as well? Do you think it encourages you to produce more dancefloor friendly music or sends you the other way?

DJing regularly does impact my productions to an extent but I try not to let the ‘dance-floor’ thing influence me in the studio. In the past when I have tried to write something intentionally ‘dance-floor’ I soon end up loosing interest so I’ve found that I feel much more satisfied and get better results when I write what comes to me and when I’m writing for myself only.

Finally what can we expect to hear from you in the next few months? Any new projects in the works?

The last production from me this year is the track I’ve contributed to Stroboscopic Artefacts 5th anniversary EP series. I feature on the third EP together with Xhin, Kangding Ray and Dscrd which should be dropping 8th Dec on wax and download.

Prev in interviews: It's About Intensity: Senking