Malmö lies on the Swedish side of the Øresund bridge, which runs from Copenhagen in Denmark. My first impression was how tranquil and clean Malmö is, a far cry from the purposeful bustle of a city like London or Stockholm. The people here are relaxed and inquisitive, with a dry sense of humour not dissimilar to that of their neighbouring Danes.

Malmö’s music scene is something I’ve taken an interest in for a number of years; and a key meeting of those strands of interest can be found at the annual Inkonst and Inter Arts Center-led Intonal Festival. Intonal is an enterprise backed by other similarly structured multi-venue electronic festivals like Unsound, Mutek and CTM. Behind this however, Intonal is the brainchild of Ulf Eriksson, perhaps best known for his role running off-kilter dub-techno label, Kontra Musik. Attending, you can see this first hand, as he can be found ferrying crates of beer in and out of venues, manning the entrances and dancing among the crowd. It makes a refreshing sight to see him playing such a hands on role and enjoying the experience so much himself, and instils confidence that Intonal’s greatest cheerleader is also its principal organiser.

By extension of this, Intonal’s programming seeks to highlight at least some of Malmö’s local talents, and there are events which take place here which are difficult to imagine being pulled off without a personal relationship preceding the bookings. One of the events which drew me to the festival for example, was the chance to see Andreas Tilliander dust off his Mokira alias for an exclusive six hour sleeping bag concert. Similarly, you could find Finn of Tomland, one of Scandanavia’s greatest hidden treasures, brewing a hypnotic four-deck ambient soup including cuts from the late Jóhann Jóhannsson.

Another of the less conventional events was the chance to see Subtext’s Ellen Arkbro and Charlemagne Palestine play the pipe organ in the local St Johannes Church. Indeed, Thursday’s principal performer was arguably the structure itself, conjuring cleansing, meditative drones, at times blissfully tranquil, at others working to discordant cacophonies. Perhaps the most interesting thing about the performance was its opening, Palestine chanting gravelly incantations, stomping his feet on the polished wooden decking and chiming wine glasses together like a pissed up distant uncle at a wedding. The building’s architectural presence cast these sounds from all directions, audience members flashing gazes around the building trying to work out where he was situated. “There has been no greater synthesiser built in the 21st Century”, he exalted after his performance, gesticulating from the balcony. Arkbro exposed further nuances in the acoustics of the space, playing simmering brassy reductions akin to those found on her For Organ and Brass LP. 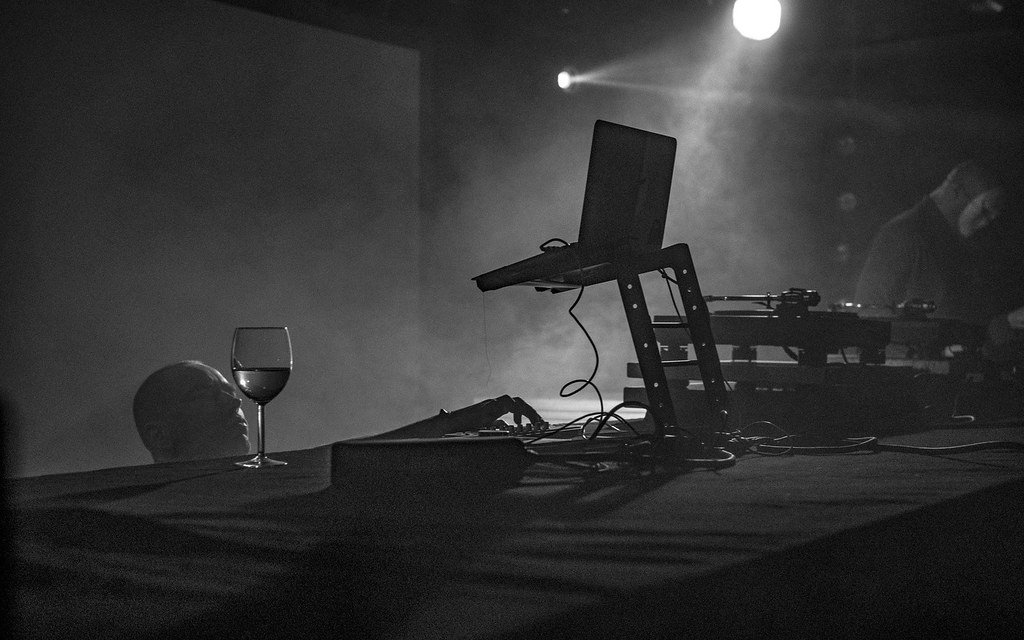 Aleksei Perälä preparing for his set.

Primarily however, Intonal takes place at the aforementioned Inkonst, a former chocolate factory converted into essentially a rather spacious nightclub, with enough function rooms to host several events simultaneously. The space’s versatility was stretched to the fullest, ranging from nightclub to sleepover room, from 3D cinema screen to artist talk space - Pan Daijing ruminating on performance, collaboration and Werner Fassbinder, and Alessandro Cortini talking about synthesisers (rather a lot). At times these spaces seemed a little jumbled, and it would have been nice to enjoy some of the bigger acts in a space outside the venues bar. In particular Japanese motorik drumming group Goat, who played a fantastic set of interwoven drums and amp-crunched drone, and noise-wave duo Group A, who adapted their set to something comparable to one of Carter Tutti Void’s shows, suffered slightly for the inferior acoustics and reduced visibility of the space.

All in all however, Inkonst made an impressive hub for an array of performers with such a diverse range of styles. Jamaican dancehall troupe Equiknoxx felt like a particularly clever inclusion in the billing, blasting the audience with an hour of hard-hitting bassweight, while collaborator Shanique Marie acted as a rather lively compère, corralling an audience from somewhat reserved music scenes into heavy skanking. Pitchfork commented last year that Equiknoxx are bringing back dancehall by making it weird again, which is a fair observation, but as well as being weird, their music is also a hell of a lot of fun, something lacking in a fair amount of electronic music circles today.

Preceding this was Elysia Crampton, a performer I’m not sure how to describe other than using the word ‘glambient’. Crampton took to the stage with keytar in hand, like a runaway member from the ‘70s band T-Rex. Her tranquillising, anime-dreamscapes brought to mind Leyland Kirby somewhat for their jarring theatricality, yet it was truly unlike any other performance I have seen, and a very memorable one for that reason. 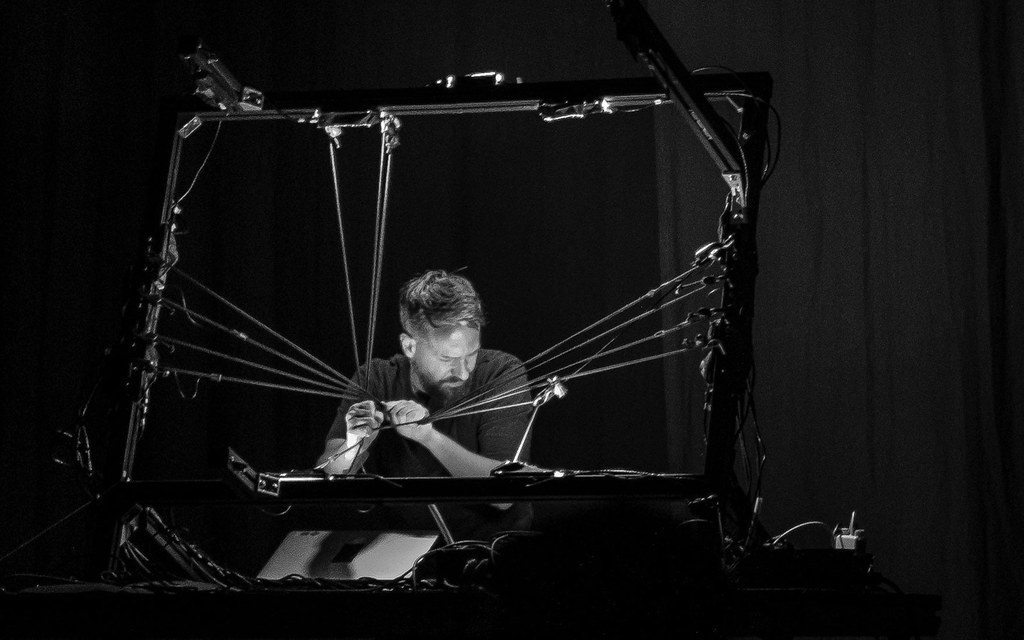 Another of the more vivid performances came from Alexis Langevin-Tétrault, performing as part of Mutek’s curation of wonderful science-fiction oddities in basement concert space, The Black Box. Preceding a kaleidoscopic 3D audiovisual performance from Maxime Corbeil-Perron, Langevin-Tétrault showcased his Max MSP programmed webbing contraption Interférences, causing portal rupturing static explosions as he wrestled with a mesh of thick cord. The physicality of Langevin-Tétrault’s performance would have been enough as a spectacle on its own, yet it was sonically very impressive too - harsh-gated nuclear fission synthesis filling every crevice of space.

The Black Box was also the setting for some of the bigger names on the lineup. Former Nine Inch Nails session musician Alessandro Cortini performed what appeared to be a rather self-indulgent show about his youth and family, set to mid-00s Oneohtrix Point Never style, arpeggiated ambience. Fennesz on the other hand provided a standout performance of amp-caked crescendos and buzzing guitar fuzz. A friend of mine once posited the theory that the best music makes you head bang, whether it’s appropriate or not, and sure enough I found myself nodding affirmative motions to the oceanic waves of sound blasted through the venue.

Pan Daijing also made a notable impression, especially following her earlier artist talk in which she discussed the interplay of emotional drain and catharsis playing live has for her. The room fell silent as she began a warm up routine as if about to embark on a mountaineering expedition, donning a silken black mask and chanting eerie vocals atop a snowballing exorcism of musique concreté and chugging Cabaret Voltaire rhythms. My only regret was that the performance didn’t go on longer, as Daijing cut to a sudden silence at the height of tension. Then again, I guess the best things in life should leave you wanting more. 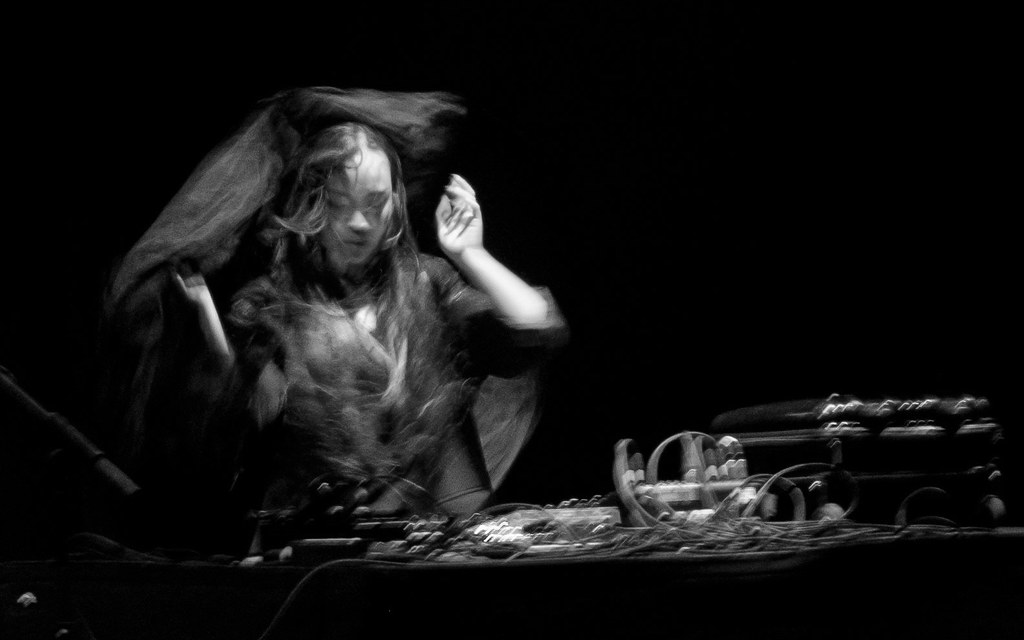 Intonal has a very DIY feel to it in many ways and this is undoubtedly part of the charm. The first night’s event for example took place out in one of Malmö’s supposed former problem areas, in a cabin like structure above an auto garage. Finn of Tomland took up duties playing between performers, delivering an array of styles with remarkable plasticity. Cuts from the likes of Martsman and Dyl morphed seamlessly between oceanic soundscapes and tweaked out minimal rollers. Rabih Beani delivered supple oceanic modulations and there was also reverent slow motion electronics from Body and Guts, yet the highlight of that first evening was undoubtedly local act Börringe Kloster and Imad Al Tamimi. Their hybrid of live oud alongside electronic backing, saw burgeoning Middle Eastern tonalities work to an enchanting climax, prompting Nuri Bilge Ceylan style philosophical introspection.

One of the things I noticed at this event, as well as several others, was how many of the artists booked hung around to enjoy the experience themselves, not just collecting their cheque and heading out, which is further testament to the curation and programming. Intonal feels as much for the artists as the punters in that sense. Intonal has also committed to a gender balanced lineup without making a big song and dance about it, which is how it should be, and makes the experience much better rounded than some of its contemporaries. Admittedly, there are a few considerations which might make it feel a little slicker, such as being a bit clearer about the ticket prices. A few of the bigger events, including the Mokira sleepover and final party, turned out to be additions to the standard ticket price, which left a slightly sour taste for some (although not too much of a dent in the wallet).

This didn’t cloud enjoyment too much though, and at Intonal you have the feeling of being welcomed into something intimate and almost cooperative feeling. In essence, there feels less of a removal between artist and audience at Intonal. Perhaps this is the direction we are heading in as more and more people seem to be developing their own involvement in electronic music. Other festivals could take note of this welcome change.

Prev in articles: That Time When // Arikon